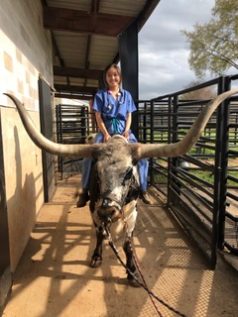 Dr. Wong has a Bachelor’s Degree in Entomology from the University of California, Riverside, and her Doctor of Veterinary Medicine from Colorado State University. In veterinary school, she tracked mixed animal medicine with an exclusive bovine and equine elective focus. She is a recipient of CSU’s Beef Clinical Excellence Award and several livestock medicine scholarships. Dr. Wong is certified in large animal acupuncture (cVMA) and holds a DVM license in Texas. Her favorite thing about veterinary medicine is that it allows her to act with justice, love mercy, and walk humbly with God. Dr. Wong has always been a nerd and is blessed to have a career where learning is constant. She loves all creatures- she has a sphynx named Muddy, a three-legged super-mutt named Lt. Dan, two ball pythons named Punchy and Rain, a crested gecko named Bacardi, and a miniature zebu bull named Murcielago. In her spare time, she likes to ride horses, make friends, and spend time with her boyfriend, Lucas, who is an impressive first-time dog dad and oral maxillofacial resident at LSU Shreveport. Bradley joined ACAC in September 2021. His favorite part of veterinary medicine is seeing these beautiful creatures God gave us. He loves the looks on the pets and owners faces and how they love and care for each other.

In his spare time, Bradley enjoys weight training, hiking, camping, fishing, jeeping, and other outdoor activities. At home, he is happily living with 3 dogs, 2 cats, 2 horses, and a bunch of chickens. Bradley also has 3 wonderful children, he rides a road bicycle, and the first time he grew a beard was after he moved to Louisiana in 2021. Nancy is part of ACAC since May 2019, Her favorite part of veterinary medicine is being involved with the medical treatment of animals and helping make a difference in their outcome in well-being. Also, she loves that every day is different and there is always something new to learn. She was graduated from Jasper Henderson High School and she has 10 years plus years of veterinary experience Katie is our receptionist who always has a smiling face when you walk in the door. She is originally from Vicksburg Mississippi but made her way over to Mississippi State University in Starkville, MS and graduated in 2018 with a degree in general studies and minors in both marketing and interior design. She didn’t quite know what she wanted to do after college but always knew she had a strong love for all creatures. She started out at an animal sanctuary in 2019 and the rest is history! Pictured with her is Blue, her Staffordshire Bull Terrier. She is so happy to be a part of the ACAC family and is looking forward to growing with them. Allen has been working at All Creatures since October 2021. His favorite part of veterinary medicine is being able to be a voice for those animals who otherwise wouldn’t have one. In my off time, I enjoy spending time with my family and relaxing with my two dogs, Kemah (Pitbull Terrier) and Petey (American Bully). Rogeria started working at ACAC in August 2022. She currently attends Louisiana Tech University as a pre-veterinary student. Rogeria loves to see all the different kinds of patients that come into the clinic. Her favorite part of veterinary medicine is comforting the animals that are sick and helping with treatment. When they are in a new environment it can be scary, so she treats them like they’re her own with lots of love and care. It makes her day to see how happy the owners are to see their pets after treating them. In her spare time, she enjoys spending time with family and friends, going fishing, and being outdoors. She also has a spoiled duck dog named Chase (Labrador Retriever), who gets lots of her attention. 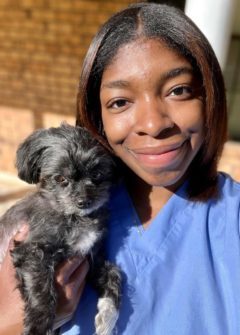 Kyla began working at ACAC in September of 2022 as a veterinary assistant. She also attends Louisiana Tech University as a pre-vet student.

Kyla’s favorite aspect of the job is getting to work with a wide variety of creatures. She enjoys learning about animals and the best ways to care for them. Furthermore, she loves that her job allows her to assist with and witness patient healing. Seeing relief in both patients and owners alike gives her a great feeling of satisfaction. For these reasons, she considers her position as a vet assistant to be the most rewarding occupation she has had.

In her spare time, she enjoys spending time with her friends and family and playing with her dog Patches. She also enjoys writing, creating art, and occasionally riding her skateboard. Colton has a Bachelor’s Degree in Biology and a Minor in Chemistry from the University of Louisiana at Monroe. His goal is to become a primary care physician. His favorite thing about veterinary medicine is getting to see both sides of medicine.

In his spare time, he enjoys being in nature, snowboarding, wakeboarding, and watching movies. He has a cat named Poncho and a dog named Sky. Katherine started working at ACAC at the beginning of October 2022. She is currently a pre-veterinary student at Louisiana Tech University. She enjoys the variety of pets that she gets to care for at the clinic. She loves getting to learn something new every day since every day here is a little different. Her favorite part of veterinary medicine is making a difference in the outcome and well-being of the pets and owners that she sees. In her free time, she enjoys hanging out with her family and friends, playing sports, hunting, and working on her family’s ranch. Growing up on a ranch, they have a lot of herding dogs. Some of her favorites are June (black mouth cur), Blue (mountain/Catahoula cur mix), Doc (Catahoula cur mix), Butter (Catahoula cur), and Toot (Catahoula cur). She also loves to ride her horse, Gus (American Quarter Horse). Hunter started working on ACAC in April 2022. His favorite part of veterinary medicine is being with animals all day and spending time with them and comforting them whether they’re just scared of being at the clinic for a check-up or are going into surgery or coming out of surgery. One of the great things about All Creatures Animal Care is he has an excellent opportunity to be with a wide variety of patients from dogs and cats to snakes and lizards.

Hunter graduated in 2018 from Louisiana Tech University with a Major in Animal Science and a Concentration in Pre-Vet.

In his spare time, he enjoys cuddling with his little lab-hound mix, Alita, and spending as much time with her as possible. Aside from that, most of his spare time is spent with his family and reading. When not doing any of that, he likes to go outdoors and do some target shooting.

As he mentioned above, he has one dog, a lab-hound mix that he adopted from the 4Paws dog shelter over in Ruston, Louisiana. She’s been with him for almost two years now and everyone in his family loves her to death. She gets in trouble a lot but she knows they love her too much to stay mad at her for too long. Alita and Hunter’s practice commands when they’re not exploring the woods around where they live.

A personal favorite movie of Hunter involving animals is the classic 1995 animated movie, Balto, about a brave half-wolf half-dog canine that helps deliver medicine to an isolated Alaska town. Fun fact it is, very loosely though, based on true events and a dog that was actually named Balto.

A fun fact about Hunter is that he always tries to make the patients feel comfortable when they are dropped off for appointments, staying after surgery, etc. He tries his hardest to treat the patients like his own dog and make them feel relaxed and safe.